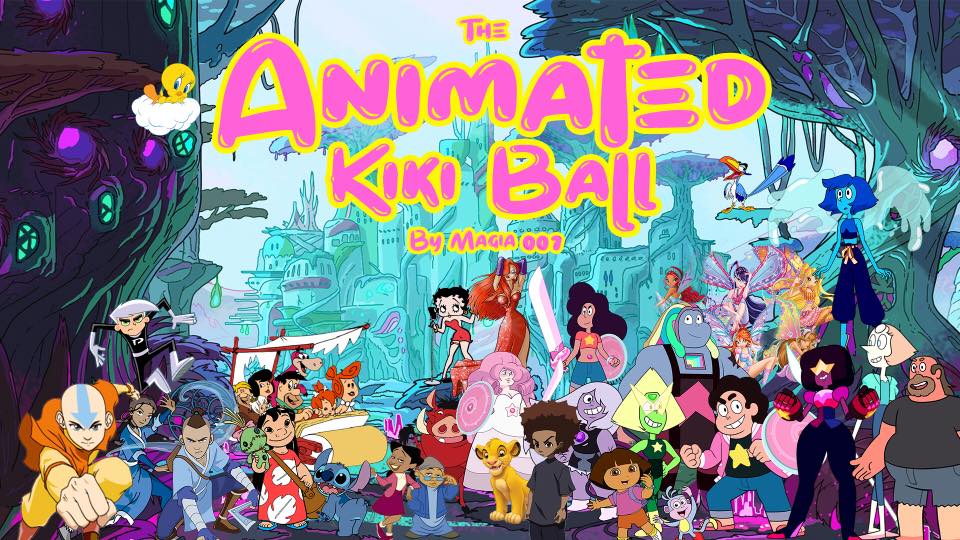 The Animated Kiki Ball in Oldenburg by Magia 007

February marks one full year of the Pier Project! And oh, what a ride it has been. I started the Pier Project to guide queer and POC youth in and around Oldenburg in the world of ballroom. This has involved classes, workshops in various categories, and training sessions, all for free. Now the Pier Project has also expanded to Hannover, and we’re working on building up the scene in both cities.

For the second kiki in Oldenburg I invite all of you to submerge in the world of cartoons for The Animated Kiki Ball.

Categories (not in order)

RUNWAY
⭐️ Steven Universe ⭐️
Steven Universe is a cartoon series about a team of genderless aliens aka gems, who are perceived as women in Earth’s society, and Steven, who is half gem and half human. This TV series has broken boundaries and portrayed things other shows wouldn’t dare talk about like teaching about consent and toxic relationships and having queer (especially non-binary) representation.

All American Runway
🎸Greg Universe 🎸
Before Steven’s dad owned a car wash he was a musician with a dream. Walk the runway like a rockstar.

European Runway
🌸 Rose Quartz 🌸
Serve la vie en rose by strutting down the runway in an all pink look inspired by the former leader of the Crystal Gems, Rose Quartz. Your shoes do not have to be pink.

Runway with a Twist
🌟 Stevonnie 🌟
Stevonnie (they/them) is the non-binary fusion of Steven Universe and his best friend Connie. Get your 10s in American Runway and twist into European, showing us you own the best of both worlds.

💛 Tweety Bird 💛
Show off your facial beauty in a yellow look with optional blue accents inspired by the infamous Tweety Bird. Please refrain from using any real feathers, and NO FEATHER HEADPIECES unless you are Native American or want to get chopped.

PERFORMANCE CATEGORIES
Avatar
This show is a true piece of art. The creators of this show constructed a very complex world with distinctive cultures and a rich history. It is mind blowing to think of how much thought was put into creating the world of Avatar.

Vogue Femme: Soft and Cunt
🌊 Water Benders 🌊
Drip, freeze and melt in a blue outfit inspired by the Northern and Southern water tribes.

Vogue Femme: Dramatics
🌬 Air Benders 🌬
Blow us away with your swiftness in an outfit that moves in the wind with you while you spin like a monk.

Old Way vs. New Way
The Fire Nation had conquered the Earth Nation, but now they rebel. Which side will win?

*Old Way
⛰ Earth Benders ⛰
Be ready to fight back in a green effect.

Baby Vogue
🏜 Sand benders 🏜
When you get bored of surfing on sand dunes, you learn to vogue. Your effect for this category should be in an off-white shade like you came straight from the desert.

MF Sex Siren (Junior, Catboy 1🏆)
🦖 The Flintstones 🦖
Rocks aren’t the only things these boys are banging… Get down and dirty like it’s the stone age.

AF Sex Siren (NB Quings)
🦁 The Lion Quing 🦁
Make the judges prrr by showing you are the feline quing of seduction.

Fashion Killer
🧚🏿‍♀️Winx Club 🧚🏽‍♀️
Come in an outstanding look that goes along with the theme of the cartoon series “Winx Club”.

Best Dressed Drag
🍥 Anime 🍥
Create a look inspired by the popular Japanese style of animation. Be your own anime character.

MF Realness
👟 The Boondocks 👟
Show us how you blend into the cisheteronormative image as a member of the Freeman family.

🎒 FF Schoolgirl Realness 🎒
Penny Proud from The Proud Family. Show the judges how real you are by showcasing your campaign for student president.

Vogue to Reggaeton
👩🏽 Dora The Explorer 🗺
Give us más gasolina wearing pink and orange… Dora hair/wig is optional… but definitely a bonus.

Production as a House
🌴🌺Lilo and Stitch🌺🌴
Ohana means family, create a production to showcase your house’s members with whatever mix of categories in beach wear inspired by the characters’ clothing (floral patterns, bathing suits, etc.). Please don’t appropriate Hawaiian culture. Send us your track in advance.